In addition to running a CrossFit gym, my husband runs a bootcamp for women three mornings a week at 6 a.m. On these mornings, he wakes up at 4:45 a.m. to get ready (read: prepare breakfast) before he leaves the house at 5:30 a.m. I get up before he leaves, and am often hit in the face awakened with a breakfast aroma of freshly sautéed onions and bell pepper, not exactly something that makes me want to jump out of bed.

Some mornings, I wake to find him eating the previous night’s leftovers at 5 a.m. He’s the only man I know that welcomes homemade deer chili, pot roast and slow-cooked collards as a first meal.

But his latest personal challenge involves perfecting hashbrowns. For the last couple months, he’s cooked various versions of hashbrowns three to four times a week. He’s made them using sweet potatoes, white potatoes, onions, jicama, daikon, rutabaga and celery root. Often, he combines a few of these ingredients to create the perfect breakfast–though, most of the time, he makes hashbrowns for his second breakfast, when he gets home from the gym around 8 a.m.

James claims that celery root is one of the best hashbrown ingredients, but it’s usually expensive and not always easy to find in stores. Actually, it’s usually in the produce section with all the other weird produce, but rarely has a label. 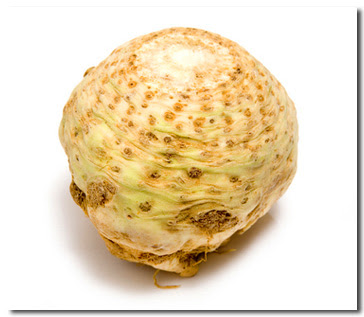 This weekend, his hashbrown recipe included sweet potatoes, white potatoes and onion. He offered me some, but I declined, opting instead for the standard bacon and scrambled eggs menu item.

How To for Homemade Hashbrowns
1. Shred chosen ingredients. He uses our food processor to make things easy, especially since he makes a hashbrown the size of a pizza. 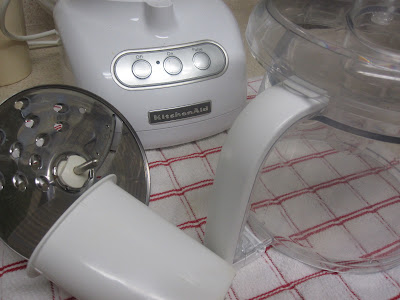 2. Add a little olive oil to large pan, then add heap of shredded veggies.
3. Sauté on both sides until brown. The tricky part is flipping the hashbrown. Luckily, we have an oversized flipper that works quite nicely.
4. Garnish with ketchup and/or cheese. James often scrambles or fries a few eggs and places them on top of his hashbrown. This produces the largest breakfast you’ve ever seen in your life.

When I declined the hashbrowns, he ate his share and gave the extra to our friend Bair, who only managed to eat half. 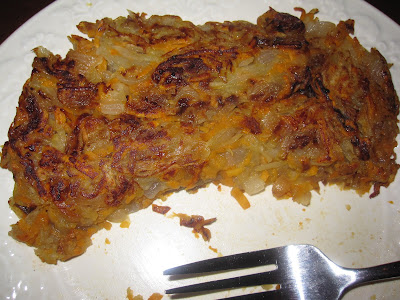