Growing up, I was characterized as a daddy’s girl. As a toddler, I always reached for him, and as a kindergartener, I woke up early just so I could watch from the window as he left for work.

You’d think my fondest memory of my dad might include the time he got me a gift the first Valentine’s Day I had been single in more than five years. Or, my first year living in Atlanta, when I called him with a flat tire and he drove an hour from home to change it. Or, at the age of 6, when he let me put lots of plastic colored bows in his hair, despite the fact that I didn’t know what ‘be gentle’ meant. Or, when he walked me down the aisle. 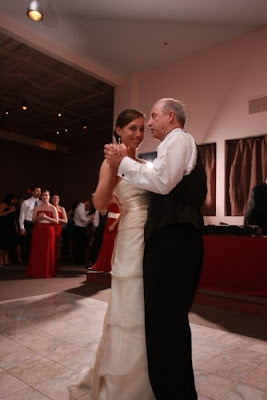 But in my mind, one memory sticks out that will forever be to me his finest hour. It happened nearly a decade ago, while I was home from college after my freshman year. I played on a summer softball league, and was being heckled by a guy who used to date my younger sister (for roughly two weeks). Honestly, I just think he wasn’t happy about being dumped, and he took out his frustration on me.

A friend of Mr. Ex played on my team, so Mr. Ex showed up to all of the games that summer. He taunted me from the stands, the same way any normal five year old would when he doesn’t get his way.

The first time it happened, I mentioned it to my parents after the game. (Looking back, I realize that just when you think men aren’t listening, they actually are. It just takes longer for everything to process.)

At my next game, I endured the taunting again, and attempted to make a beeline for my car after the game. I was putting my cleats and glove into my trunk just as I heard Mr. Ex pull up behind my car.

With his windows rolled down, he leaned towards his passenger window to continue his wisecracks. I was startled, as can be expected when a car suddenly pulls up within inches of you. I’m sure my face said it all, as questions started rolling through my head. ‘Why is he doing this?’ ‘What did I do to him?’ Why won’t he leave me alone?’

Just as soon as I leaned down to look at him (I have no idea what I would have said), through the driver’s open window, I saw my dad walking toward the car from a distance. He moved slowly, surely–his gaze fixed.

Thinking back, the scene is almost comparable to an MMA fighter as he makes his way to the octagon. ‘Hell hath no fury like a woman scorned’ doesn’t hold a candle to a dad protecting his daughter.

In a split second, the world slowed down, and a wide grin spread across my face. Mr. Ex, confused as to why I’d be smiling at his taunts, remained steadfast in his endeavor.

Out of nowhere, my father clamped his hands down on the open driver’s side window. Mr. Ex abruptly turned away from me and looked straight up at my father, who said, ‘You got a problem? You talk to me. Don’t you ever talk to my daughters again, or you’ll have to answer to me.’

And that was the end of it. Mr. Ex, scared to death of a 50-year-old man who was 5’10”, 155 pounds, scurried off as soon as he could, never to be heard of again. My father made sure I was alright, and then we went home, had dinner with the family–and it was like nothing ever happened. For him, I guess it was just another day being a father.

Every time I think back to this memory, that same wide grin spreads across my face. I’m not exactly sure if my dad was waiting in his car until my game was over, or if he just happened to show up at the right time. But either way, he was there when I needed him, yet again.

Sign Up for these Fun Family-Friendly Memberships Near Gainesville

10 Easy Things Moms Can Do to Improve Their Health

Chores for Kids by Age