Today James Michael officially turns 3 months old. I haven’t posted in 2.5 week (figures!) so this post will be a catch-up similar to the last one, including a ton of pictures from the past few weeks. 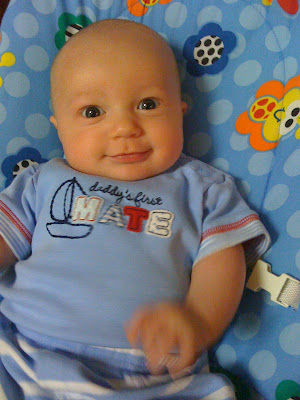 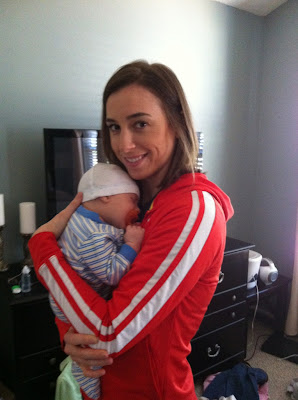 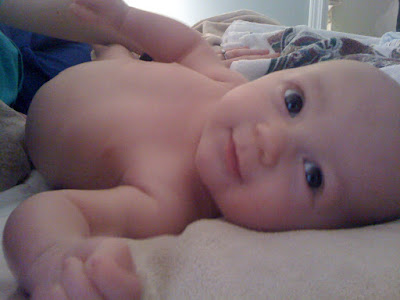 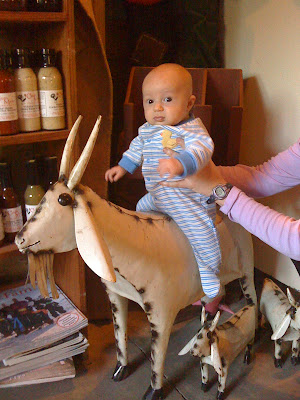 He learned how to ride goats 🙂 … 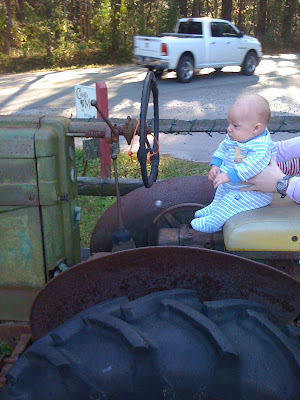 …and drive a tractor. 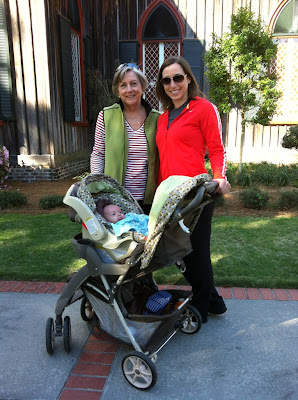 And he surprised us all by being on his best behavior while we spent half a day shopping for wedding stuff and venturing around downtown Bluffton. As long as you keep this fellow moving, whether in a stroller, car or in your arms, he’s always happy. 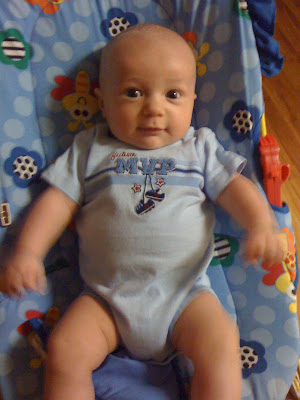 I’m happy to report that at the 11-week mark, JM’s sleeping pattern suddenly began to improve. For the past week, he’s had a couple six-hour stretches and on other nights four- to five-hour stretches. But the real kicker was last night on the eve of his 12-week birthday. I put him to bed at 8:15 and he slept until 4am–nearly 8 hours! Of course, this mama awoke at 2:30am–any of you nursing mamas will understand how an 8-hour stretch feels, especially the first time. 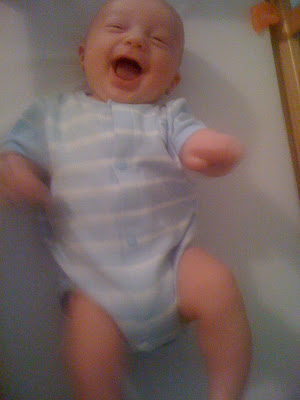 James Michael’s personality has really started to shine. Sure, he’s been “talking” for several weeks, but lately, he’s realized just how loud he can be. Sometimes, he even startles himself with his vocal strength. 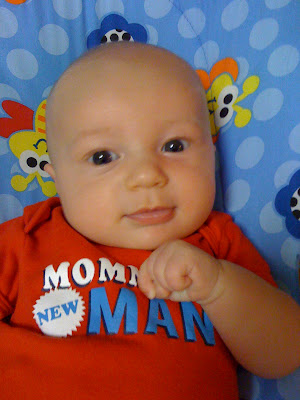 He’s also continuing to kick and squirm for hours a day. I have no idea how he has so much energy. 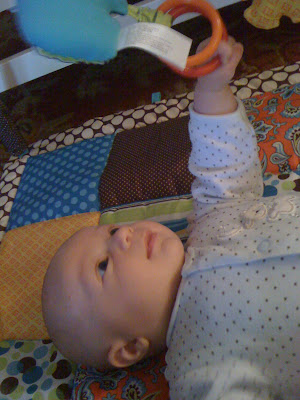 He’s starting to enjoy his activity mat more and more, and recently has started to respond to toys. Of course, I love to put them right in his face so he has no choice. 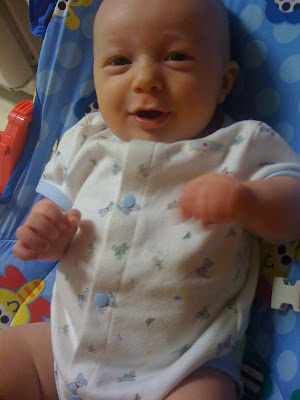 He still LOVES his bouncy seat, and I call him my little sous chef since that’s where he sits while I’m cooking in the kitchen. We just talk to each other while I cook, and he’s usually content in the seat for at least 30 minutes. 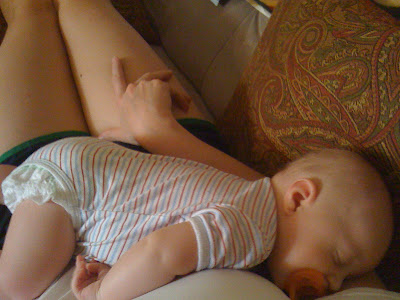 Sometimes, I have to remind myself that he’s still a baby. After all, in his mind I can tell he thinks he’s 3 years old.

I put him in front of mirrors a good bit, and usually he just stares. But it was so funny to see him talking to himself the other day that I just had to capture it. 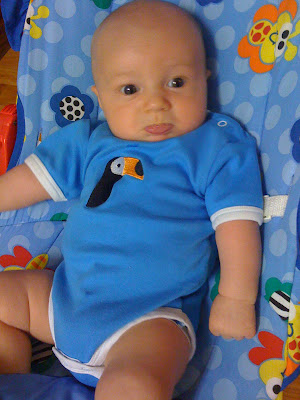 No, he’s definitely not perfect all the time. He’s fussy when he’s hungry or tired, and sometimes when he’s not entertained enough. Then, Senior Poopy Pants makes his appearance. And still, it’s hard not to smile at him because that puffed up bottom lip is just so cute. 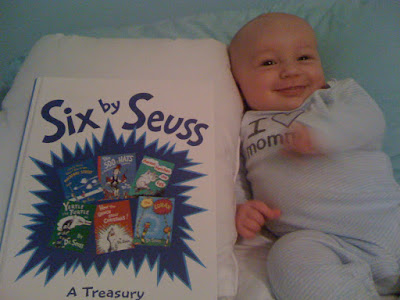 I recently read him a 20-minute story from his Dr. Seuss book, and he was attentive the entire time and constantly talking to the book.

3 Months Postpartum
So what’s been going on with me? For the past month, I’ve headed up to the gym early a few times a week so I can squeeze in a decent workout before the classes start. James either brings JM up to the gym with him later, or they come up early and do chores together. Yesterday, James strapped JM on his chest and a backpack blower on his back. And last week they vacuumed together. We’re teaching him the value of hard work early 🙂 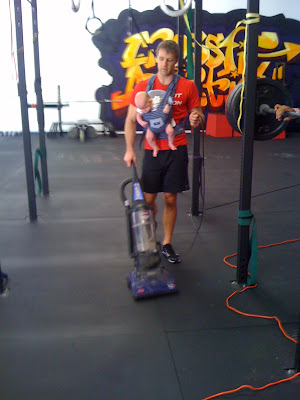 Did I ever share what James gave me for Christmas this past year? A Dick’s Sporting Goods gift card along with this little ensemble. 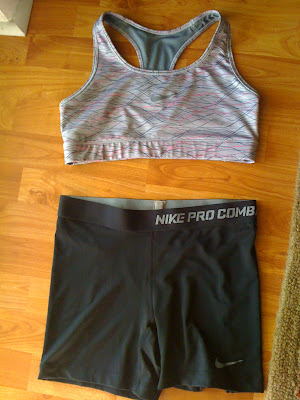 Has anyone forgotten that I was 39 weeks pregnant at the time?!?! James knows I love workout clothes, but I couldn’t help but think this gift might be a challenge.

I’m usually a fairly modest person, but rarely do I back down from a challenge. I’ve waited until 3 months postpartum (to the day) to debut this new outfit. 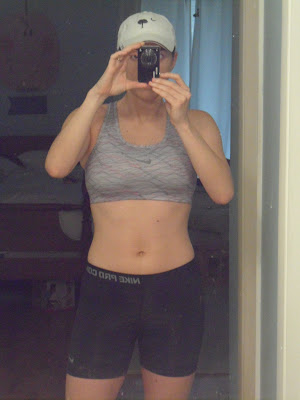 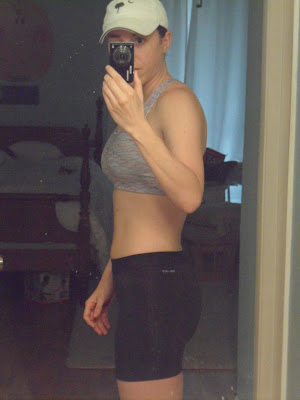 Sure, my body isn’t perfect, but it wasn’t before I was pregnant either. I’m happy with where I am now, and know that I have couple months to continue to firm up before swimsuit season. I don’t hink he realized it at the time he purchased this outfit, but this compression sports bra has been a lifesaver for all those CrossFit workouts that involve running!

I think the fact that I have the guts to post these pictures means that I win the challenge, hands down!

Hospital Bag Checklist: Just the Basics for Mom and Baby