Dec. 30 seems so long ago at this point. 2.5 weeks really has flown by. Every day I feel like James Michael looks so different. Even from some of the pictures I’ve taken, it’s hard to believe they’re all of the same baby. He looks different from every angle and makes so many different faces, from scrunching up his forehead to smirking after he nurses. 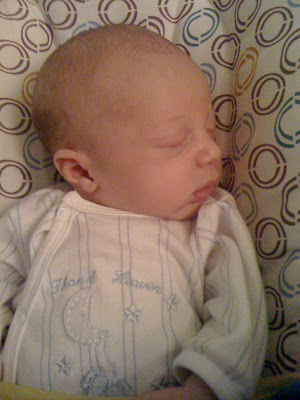 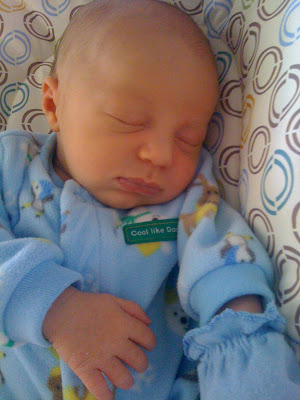 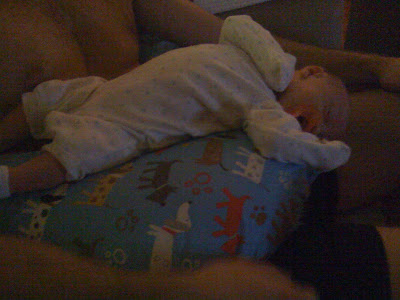 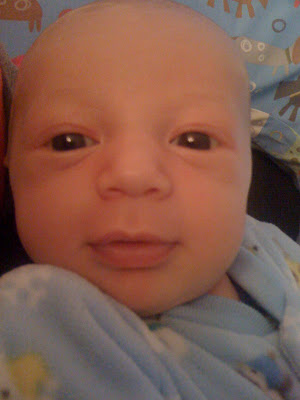 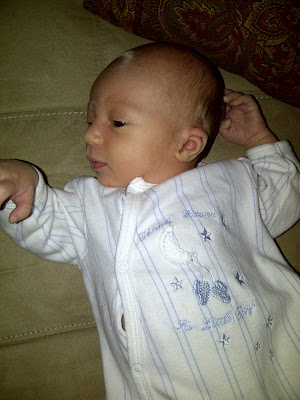 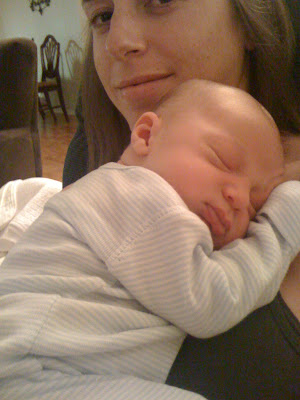 Saturday night, James Michael came down with a cold and his sneezing became more frequent and he developed a cough. By Sunday the poor fellow was downright miserable–and so was his mom. Neither one of us has slept much the past couple nights–he wakes himself up often coughing, and I wake up constantly making sure he’s still breathing ok. My mom told me it breaks your heart the first time your baby gets sick, but I just wasn’t expecting it to happen this soon.

Luckily we had our 2-week wellness visit at the pediatrician’s office on Monday, and it made me feel better she could check him out. Thankfully, the cough isn’t in his lungs and he didn’t have a fever. She said there’s really nothing I can do for him, which is a horrible feeling for a parent.

But he’s still nursing like a champ so I’m hoping that all those great nutrients will help his little body fight off the sickness.

Speaking of his appetite, when we went for his 48-hour appointment two weeks ago, he weighed in at 6 lbs 15 oz (he was 7lbs when he left the hospital the day before). The pediatrician told us that the goal for his two-week appointment was for him to be back up to his birth weight of 7 lbs 6 oz.

Yesterday, we were pleasantly surprised to learn that he now weighs 7 lbs 14 oz, so he gained almost a full pound in two weeks! Even the pediatrician seemed impressed, but reassured me that it’s not possible for him to gain too much this early on.

So how am I feeling? My biggest hurdle continues to be lack of sleep. Luckily James has been coming home from the gym for a couple hours during the middle of the day and I’ve been able to take advantage of naps when needed.

I had hoped to do some small projects around the house and maybe come up with a future workout plan, but with James Michael being sick, my focusing is solely on him at this point. I did attempt to rep out a few pushups on my toes going chest to ground the other day. Um wow. I did two pushups and then had to switch to doing them on my knees. Despite losing the baby weight, it’s been so long since I’ve done pushups prescribed that it’s going to take a while for my muscles to readapt.

When I try on my regular clothes, I can tell that my body has changed a bit. Pants are tighter through the thighs and hips, which was to be expected, and I still have a little flab around the belly to tone up. But I’m very happy with how my body has bounced back just 2.5 weeks after delivery. I’m sure CrossFit will help remedy alot when I start back in a few weeks.

Once again, let me reiterate how much I can’t wait to get back in the gym. James and I are both big fans of routine, and CrossFit has been part of my weekly routine for so long that it feels weird not being in the gym 4 to 5 days a week. He probably gets tired of me asking how the gym was every night when he comes home, but it’s my way of staying in touch with CrossFit 🙂 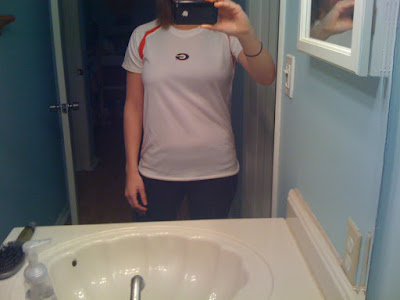 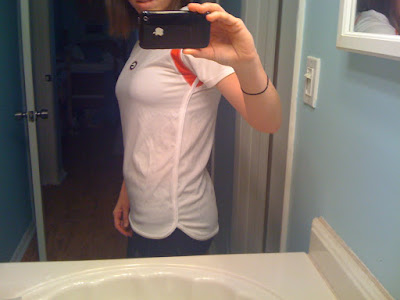 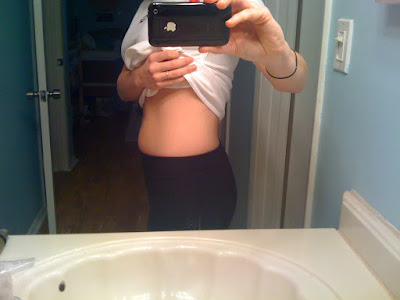 During JM’s long nap this afternoon, I did manage to make a sweet potato casserole using palm sugar, gluten-free flour and extra butter and pecans–because that’s how we roll in the Hobson house. We’re definitely not afraid of consuming fat 🙂 And I’m still on my salad kick and have been downing some chocolate milk lately, too. 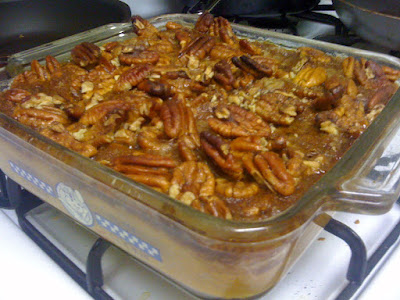 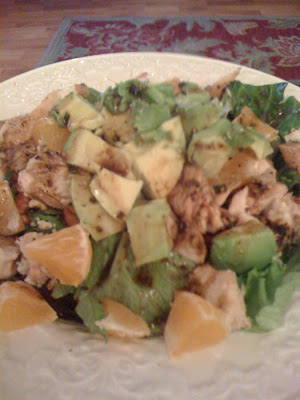 Hospital Bag Checklist: Just the Basics for Mom and Baby