10 reasons I love my husband

We’re not big into a traditional Valentine’s Day. It’s not that we don’t take time to dote on each other, it’s just that we don’t go by the traditional means of flowers and chocolates. Not that I’m opposed to a box of chocolates, but we both know they’d be gone in 24 hours, so it’s best to avoid them from the start.

Since Valentine’s Day falls on a weekday this year, we decided to celebrate last night instead of making plans after the gym tonight. So I booked us reservations at Seasons 52 because I remembered the fare is primarily veggies and protein. When I looked up the menu before we left, I saw that every meal is less than 475 calories. Oops, I shouldn’t have said this out loud because James replied with, ‘Great, now I’ll have to eat three meals just to get enough fuel food.’

Last week, James went to CrossFit North Atlanta to have his body fat tested in the Bod Pod using a coupon he’d gotten from the Garage Games. Not surprisingly, he came in at 7.8% body fat and 165 pounds of lean muscle, putting him in the elite athlete category. He took home a sheet outlining his stats, with recommendations as to how many calories he needs daily to sustain his body fat and muscle mass given he works out 4 to 5 times a week. Guess what that number was: 4,071 CALORIES! That’s daily, people. I could devote weekly posts to James and his crazy body, but I try to spare you all. The Bod Pod tester told him she’s never tested anyone with that low of body fat.

I was a bit hesitant to take advantage of the Bod Pod and know my true stats, so maybe that’s why I subconsciously chose Seasons 52 for dinner last night. James enjoyed the Buffalo Chili and Rainbow Trout, while I opted for Chicken Chili Relleno, Spinach Salad with Pear and Pine Nuts, and for dessert, a mini indulgence in the choice of Mocha Macchiato. Thank goodness it came in a shot-sized glass so I couldn’t go overboard.

In lieu of a traditional Valentine’s Day gift, I’ll just share 10 reasons I love my husband: 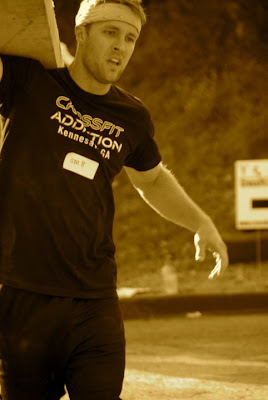